The Windmill at Windmill Farm is recorded in journals dating back from 1806, making the Windmill over 206 years old. 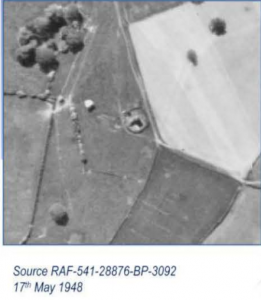 The earliest aerial pictures of the Windmill are dated 17th May 1948 and were taken by the RAF.

From the records available the windmill at Windmill Farm was constructed by 1806 when Mr Wyley advertised the mill for lease.

The mill contained two pairs of stones, an addressing machine, a machine for shelling oats and roomy garners and also a kiln and adjoining stable.

Records in the Lichfield Gazette detail the mill for lease again between 1834 and 1837 after which the trail of records for the mill at Windmill Farm cease.

It is thought that by the turn of the century the Windmill had ceased work.

By 1902, the mill had been converted into a simple cottage with a samll single storey extension ; the cottage was then known as Cosy Cottage.

It is unclear from the records how long the mill was occupied as a dwelling and it is thought the cottage became derelict between the period 1902 and 1962.

The mill was then converted into a dwelling house with a circular doughnut addition and a single storey side extension in the 1970’s.

The Wright Family purchased Windmill Farm and the surrounding land in 2010 and set about with plans to restore the Windmill to its former glory and reinvent Windmill Farm fit for the modern era. This involved radical and innovative design and building techniques. The restoration of the Windmill took approximately 5 years, and in 2015 the Windmill stood once again restored with working sails, and along side it a house fit for the modern age and to act as a base to oversee the newly created Estates interests.

As a landholding Windmill Farm Estates operates over 300 acres of Staffordshire farm land.The Estate has very good links with local

contractors and all of the Estates landholding is involved in commercial arable and cattle farming.

Windmill Farm Estate also has a keen interest in property refurbishment and development, the Estate is regularly involved in the developing of inner town brownfield sites, aswell as building affordable homes for the private rental market.

The Estate also has a keen interest in owning, breeding and producing their own personal elite showjumping horses that compete nationally and internationally all over Europe.

Windmill Farm Estate are happy to welcome a new member of staff, Jack Cleary. Jack has recently joined the team as our new 2nd/Young Horse Rider. Originally from Ireland,Jack has an extensive background in equine sector and will be assisting the team in producing quality young horses in-house. Jack is a keen rider and will […]

Load More…Follow on Instagram
We use cookies to ensure that we give you the best experience on our website. If you continue to use this site we will assume that you are happy with it.Ok